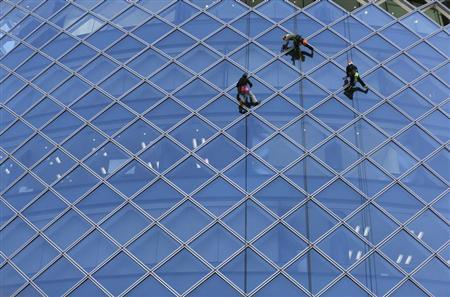 (Reuters) – Japanese manufacturers’ sentiment turned positive in the three months to June for the first time in nearly two years, a closely-watched central bank survey is likely to show on Monday in a sign recent market turbulence has yet to hurt the feel-good mood created by the government’s reflationary policies.

The Bank of Japan’s “tankan” survey will likely show the headline index for big manufacturers’ sentiment improved 11 points from three months ago to plus 3, according to a Reuters poll.

“You cannot deny that the economy is improving, and that domestic demand is leading the way,” said Hiroshi Miyazaki, senior economist at Mitsubishi UFJ Morgan Stanley Securities in Tokyo.

“Government stimulus spending is contributing to growth and the services sector is gaining strength. The BOJ’s monetary easing is becoming more effective, so there’s no need for additional measures.”

Big manufacturers and non-manufacturers both expect business conditions to improve further three months ahead, a sign they see the negative effect of the recent market turbulence on the economy as limited at least for now, the poll showed.